My first baby arrived when I was a mere 21, yes, I was 21 once!  Looking back, in the grand scheme of things I had barely left school long enough to work out what sort of a mother I wanted to be and naively embarked on the motherhood ideals many a young (and often older) woman believe lay ahead of them during their pregnancy. So, when Hugo popped into this world, “popped” being euphoric recall as the reality was it took the best part of 2 days to get the little gremlin out, I just assumed that I would breastfeed my little bundle as my mother had so easily done with me for the best part of two years!

Latching on seemed a doddle from what I remember, but my paranoia that he wasn’t getting enough food thus leading to him not sleeping enough, leading to him screaming endlessly and therefore not eating enough (see the cycle there?) was very much the issue. I soon became an over-tired, emotionally wrecked dairy cow – on the pump at least three times a day, just so I could decant the breast-milk into a bottle to see how much he was eating and try to bring an end to the cycle. I was stressed and my baby was stressed. This was not a happy time. To be honest, the rest is a bit of a blur, until I woke up one morning with cheeks like Aunt Sally, boobs like boulders on which you could easily fry an egg and feeling like I’d had a house dropped on me! Welcome Mastitis! This hadn’t happened over night, but I’d ignored the signs for a good part of a week before admitting there was a problem – as the last thing any new mother wants to admit to is that there is a problem and that all is not well.

After a trip to the drs, a long long sleep, a round of antibiotics and a lot of pain killers – I was functioning again. Amidst all this I’d taken a step which felt like I was betraying womankind and thousands of years of tradition, like I had failed as a mother and let down every midwife on the planet – we’d switched to formula!

Not only did the world not stop spinning but, more importantly, the relief was immense – I could focus on being a mother instead of the milk pumping maniac I’d become and resented.

Needless to say, 13 months later when Bruno made his debut appearance, with the mastitis and stress still fresh in my mind, I made sure the formula and bottles were ready!

Fast-forward another 7 years to March 2015: now a bright eyed 30 year old, content with myself as a woman and mother – with a clear vision on how I want to raise my  third baby, I really couldn’t think of any reason why I would not be able to breastfeed.  So stalwart was I that breastfeeding was going to work that I scoffed at my mother’s suggestions of getting a few bottles and a steriliser “just in case”- my thoughts: “what could possibly go wrong?”.

I was now older, in a much better emotional place, calm and at ease with being a mother – I got this!

Casper James entered the world at 14.57 on the 27th of March, by about 15.15 I had a little suckling, nestled into my bosom – the perfect picture of mother and baby. Nothing could stop me – I was rockin’ this!

Casper, 1 hour old – all was going well at this point!

Throughout the first night (spent in hospital for routine checks) my little man snuggled into his mummy’s bobbies for hours on end. My nipples felt a little sore and on a number of times I called the midwife to confirm the baby was latching on correctly – yup, she thought he looked great!

Over the next 24 hours with each feed my nipples grew more sore, then cracked, then bloody… was this normal? I Googled away to find that this most definitively was not normal, but, I persevered as I was not going to let this get the better of me. I started to dread each feed, anticipating the pain that would come with it. 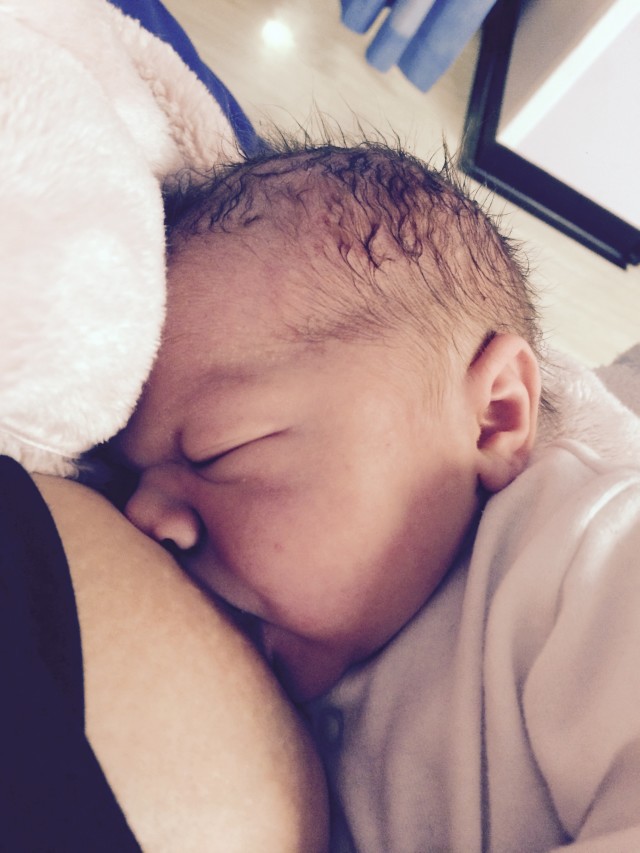 We bought a pump in the hope this would more gently extract the milk which I would then be able to pass onto the baby; we bought nipple shields (I would in no way recommend these as a remedy for painful nipples as they killed!!); I slathered on the nipple cream; I took pain killers… until, on day three (generally known as the most tearful day after birth anyway due to milk coming in), after tears started to well in my eyes at the thought of the next feed my mum took one look at engorged boobs and called the drs for an emergency appointment.  You guessed it – I yet again had mastitis.

The tears rolled and the feeling of failure set in, although only momentarily – this really wasn’t the end of the world. Sure, my visions of serenely breastfeeding my child whilst butterflies fluttered around us and the sun shone endlessly were dashed, but my baby was happy and healthy and continues to be and isn’t that the whole point?!

There are, of course, hundreds of benefits to breastfeeding, but there can be pros to bottle feeding too: it gives dad, grandma et al a chance to bond with the new arrival by feeding which can be such a close and special time; it gives mum the chance for some downtime without worrying about the next feed; in my case, it allows me to give the older boys a proper bedtime (as Casper seems to want to go to bed at exactly the same time!) – read a book, have a cuddle and catch up on the highs and lows of their day – all whilst daddy tends to Cas.

Breastfeeding, unfortunately, doesn’t work out for everyone, for a multitude of reasons – it doesn’t make you a bad mother and it doesn’t mean your child will be any less happy.

You may also enjoy: